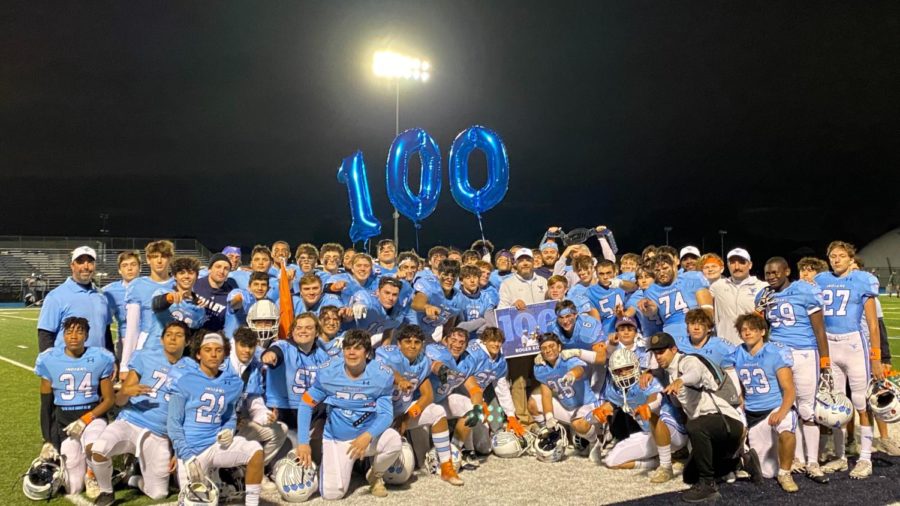 With an astonishing record of 7-0 as of October 7th, Wayne Valley’s 2022 Boys Football team is undeniably a force to be reckoned with. The players have displayed fierce determination and ferocity which has led them to achieve such an accomplished record. Someone who should not be forgotten, however, is the man behind every play, who has guided the 2022 team, along with so many before, to success: Coach Kotlarz.

For roughly twenty-six years (fifteen as head coach), “Coach K” has been a vital component in the advancement of Wayne Valley Football, and his dedication to not only the game, but to the players, is evident to all who witness the product of his coaching. Aside from being the head football coach, which is an extremely time-taxing job, he is also a physical education teacher, and one of the coaches of Wayne Valley’s very own Girls (inaugural) Flag Football team established in 2022.

With all this being said, it should not come as a surprise that myself (Brooke Parker), and my co-writer (Mia Turrin) quested to delve deeper into his highly-valued opinions, ideas, and thought processes. We formulated a multitude of questions and sat down with Coach Kotlarz to try and get a better understanding of the man behind Wayne Valley Football.

What exactly sparked your interest in coaching?

“You know, I was always involved in football, in middle school, highschool, and then I played in college, so when I was done playing, I think initially I just wanted to kind of stay in a competitive environment and enjoy that part of it. Once I started coaching for a couple years as an assistant, I kind of knew that this was something I wanted to pursue. I went back to school to get my teaching certificate, and it’s been a good lifestyle in terms of a career and teaching and working with kids, so I enjoy that part.”

How do you feel about this year’s team? If there was one word you would use to describe it, how would you describe it?

“I would say ‘tough.’ Yeah, we’re tough. We’re definitely kind of like a scrappy team. We play hard, and, you know, between mental toughness and physical toughness, I think that’s where we really shine and have been able to win a couple of those games.”

You also coach a successful Girls flag football team. What inspired you to commit to that?

“It’s tough to pick one moment because it really can vary between, you know, there’s like on the field successes and there’s moments that I remember in terms of like big victories. In that regard I’d say when we won it [state championship] in 2019 at Metlife, that was tremendous—only because we weren’t necessarily the favorite. We beat a team that had beaten us about a month earlier, but we were losing at halftime 17-0, so just the way that game transpired was really a fantastic moment to finally get that championship. We had come real close a few times and fallen short, so that was a great moment. But then there’s other things, like just little things in coaching. I remember in 2016, we had a player who was sick, so he was never able to play but against West Milford, but we were able to get him into the game for one play, so there’s moments like that that just kind of make you think that it’s bigger than just the sport and the scoreboard. So those were really two great moments. The other thing that I really enjoy is that I’ve been able to mentor some coaches who have moved on to become successful ones, so I love always seeing those guys that I was able to work with when they were younger, and now they are doing really well at their own programs. This season? Hopefully it continues and we have some big moments coming down the road, but I think the win at Lenape was really a great moment because it really showed our character. Again, we were losing, we were playing a very good team, and actually the game started off with Lenape scoring on the first play of the game, so it didn’t look great early. But our kids, again, going back to their toughness and their resilience to just keep on chipping away and to play for 48 minutes and 4 quarters in the game at the end, I think that was really a season-defining moment to win a game like that.”

Are there certain years you get a feeling about the season/ are you good at estimating the success of the team?

“Yes, mostly yes. There have been seasons that I think we can win between 5-7 games or I think we can win 8 or 10 games, but then every once in a while, really with this group when they were juniors last year, I remember saying I have no idea if we will win 2 games or 10 games. I really didn’t have a good feel for it. Because we were so young. For this season going in and knowing we had all that experience, I felt like this team could be very good and I think to a certain degree we even exceeded some of our expectations to come out 6-0 so far now. Again, there is a lot of football to be played but we’ve done a nice job, and we have some really good solid wins there, so I’m definitely very pleased this season.”

What is a future career goal you have, do you plan on coaching for a long time?

“You know I’m really at the point where I kinda just worry about this season and then at the end of the season, I try and re-evaluate things—but for right now, I’m pleased. I think that Wayne Valley has been a really good fit, not just the football part, but the school community and teaching, so I’m pretty happy and that’s really where my mind set is.”

Anything to say about this year’s team?

“Well, I would say that I’m excited about tonight’s game, hopefully we’ll have a great crowd, and everyone will be fired up, and hopefully we perform well.”